As it’s Father’s Day, I wanted to cook my dad a meal of his favourite things. As I mentioned previously in my ravioli post, I’m making him that as a starter, then cooking an Italian chicken dish, then serving his favourite dessert, Eton mess. I made this Eton mess a few weeks ago at our second barbecue of the year and he absolutely LOVED it, so I figured it was the best choice to make today.

It’s really easy and I just do a few little things to make it a bit more special and delicious. I think I picked up the tip of mashing and steeping the strawberries from a Nigella recipe and it makes ALL the difference; you get a lovely sweet sauce which makes the whole thing much more flavoursome than the strawberries would be if they were just ‘au natural’. I steep the strawberries in Chambord, and although it’s a raspberry liquer it really brings out the taste of the strawberries and doesn’t taste overly alcoholic (my pet hate in all cooking!). If you don’t have Chambord then any other strawberry liquer would do, or even fruit juice like cranberry, pomegranate or other red fruit.

To make things a bit easier on myself I made the meringue last night; it’s much easier that way and it keeps so well it seems silly not to. It cooks at such a low temperature there’s not much you can do with the oven whilst it’s in there so it’s good to get it out the way before you’re going to be doing other cooking.

2 tablespoons Chambord or other juice/liquer

Preheat the oven to 140C. Seperate the eggs and keep the yolks (they’re great to use in pastry). Whisk them with an electric whisk (or by hand, if you’ve got arms like the hulk) until they’re stiff. Add in half the sugar and keep whisking until really stiff and glossy. Fold in the remaining sugar and then spread the meringue onto a lined baking tray, into a circle around 9 inches in diameter and 1 1/2 inches thick, or into small blobs around 3 inches in diameter.

Bake in the oven for around 40 minutes until golden and set (the smaller ones will probably take a bit less time than that so just keep watch!). If you flip the meringue(s) upside down it/they should be dry underneath but will probably break apart (this is ok since you’ll be breaking it/them up anyway). It will give you an opportunity to see inside; it/they should be marshmallowy and gooey inside with a nice crunchy crust.

Leave the meringue(s) to cool either overnight or whilst you get on with the other things. 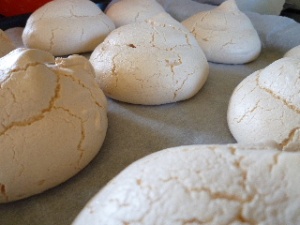 Cut half of the strawberries into quarters and put into a bowl. Mash gently with a fork and then sprinkle with the tablespoon of caster sugar and the Chambord. Mix everything together well. Quarter the remaining strawberries and sit them on top of the mashed ones, but don’t mix together. This way you get the contrast in texture between the mushed strawberries and the raw ones. Yum. Leave everything to steep for at least half an hour, but you could leave them for hours if you wanted to.

When you’re ready to serve, pour the cream into a bowl with the vanilla and whisk until thick but still soft. Don’t overwhip it because it becomes dry and less voluptous. Crumble in the meringue and toss in all the strawberries, sauce and all. Fold everything together and serve in bowls or glasses.

As my dad says, it’s the best treat of the summer, and should be enjoyed as much as possible!

Carbonara is the dinner I cook if I have nothing else in the house, but I don’t want to go down the road of fish fingers and beans (which is my default ‘I can’t even face actually TOUCHING the food’ dinner). I tend to always keep a pack of bacon in the fridge, because it keeps for ages and can be used in so many different ways. I’ve also normally got eggs, unless I’ve used them all, along with a block of parmesan (currently I’ve got a block the size of my head in the fridge, you can never have enough), so it’s a great fallback dish.

I know it’s not going to win any ‘healthiest dinner’ awards, but it’s really really quick to make (it only takes as long as it takes to boil the pasta, plus about 3 minutes more), and it tastes amazing. I think it’s elegant enough to serve for a dinner party, and it’s a great one to cook if you’ve got a friend coming over because it’s so quick there is plenty of time for chat and there’s no prep or anything involved!

I love the combination of salty, creamy and cheesy, and the nutmeg is the perfect sweet, spiced note on top of everything else. Nutmeg always reminds me of the rice puddings my mum used to make, it’s one of the most nostalgic foods I can think of! You can use the traditional cubes of pancetta, although I tend to find them quite tough sometimes because of the chunks of fat (I’m REALLY fussy about fat on meat, I usually cut most of it off if it’s not crispy), so I use rashers of pancetta or smoked bacon instead and I think I like the texture of this more with the silky pasta. I also always use linguini for this, I suppose then I shouldn’t be calling it Spaghetti Carbonara, but I really don’t think Linguine Carbonara has the same ring to it…

I don’t know where this recipe is from; I’ve probably taken elements from here there and everywhere. I don’t bother weighing anything out or any of that annoying business, this is relaxed cooking at its finest.

4/5 rashers pancetta/smoked bacon
200g spaghetti/linguine (a reasonable handful)
A knob of butter
1/2 glass white wine
2 large eggs
A handful of grated parmesan
A pinch of nutmeg, grated
A splash of double cream if you have it
Pepper

If you time this right you can do everything in just the time it takes to cook the pasta. The first thing I do is put some water on to boil and start cooking the pasta. Once the pasta is in the pan, snip the bacon into a large frying pan (large enough to take the cooked pasta) with a drizzle of olive oil and fry until crisp.

While the bacon is frying and the pasta is boiling, beat together the eggs, parmesan, nutmeg, pepper (you don’t need salt because the bacon and the cheese are salty enough) and cream if you’re using it (you don’t have to but it makes it richer and creamier. I only use it if I have some in the fridge).

Once the bacon is ready, pour in the white wine and simmer until it’s reduced down and syrupy. Hopefully by this point the pasta will be ready. Drain it, turn the heat down on the bacon pan, and add the knob of butter to the bacon and winey juices. Add the pasta to the bacon pan and toss in the butter and juices until the pasta has absorbed it all.

These puddings from Nigella’s How to Eat are another permanent feature on my repertoire and I think I’ve cooked them for pretty much everyone now. They’re just so incredibly quick and easy and I generally have all the ingredients in the house. They’re the perfect thing when you just want an intense chocolatey dessert – the gooey chocolate sauce is amazing! Be warned though, once they come out of the oven they’re like lava, so it’s worth waiting a few minutes for them to cool slightly (unless your greed takes over and you’d rather risk a burnt tongue than wait a few minutes more).

The way to eat these is to scoop a little out of the centre and pour some cream into it, then keep dribbling small amounts of cream into the pudding as you eat. Yummm.

Preheat the oven to 200C. Melt the butter and chocolate together however you like (I just melt them in a saucepan over a very low heat, but you could use the double boiler method or microwave).

Meanwhile, whisk together the eggs, sugar and flour until combined (I do this in a large jug as it makes it very easy to decant the mixture into the ramekins!).

Once the chocolate mixture is melted and cooled a little, add it to the eggs, sugar and flour and whisk to combine. Pour the mixture into 4 ramekins (you can grease and flour them if you like, I used to but now I don’t bother)

Sit the ramekins on a baking tray (this helps to cook them from underneath) and cook them for around 10-15 minutes depending how much goo you want and how fierce your oven is.

Serve with lots of double cream!

Despite being called a cake, I think this is much more of a dessert. Yes, I made it for my husband this year as his birthday cake, but it’s definitely chic and rich enough to pass as a pudding for a dinner party. I first came across it watching Nigella Bites and instantly wanted to just throw my face into it because it looked SO GOOD. The cake is flourless, which makes it really light despite its richness. In fact, after I made it for my husband’s birthday we had leftovers which I put in the fridge, and if you eat the cake chilled it takes on a totally different texture; it’s much more dense and truffley. In my book, this can only be a good thing.

I decided to make one as a dessert for my aforementioned barbecue because it was easy to prepare ahead and would be plenty to go around. The only thing I change about the recipe is that I don’t use the Cointreau or orange. I’m really not a fan of Cointreau and I personally think all sweet things are ruined by the addition of alcohol (e.g. rum truffles, gag). So I omit the orange too because I’m intolerant to oranges. To be honest, I don’t think it suffers at all! Below is the recipe and method as it appears in the book. Enjoy!

Line the bottom of the cake tin with baking parchment.

Melt the chocolate either in a double boiler or a microwave, and then let the butter melt in the warm chocolate.

Beat the 2 whole eggs and 4 egg yolks with 75g of the caster sugar, then gently add the chocolate mixture, the Cointreau and orange zest.

In another bowl, whisk the 4 egg whites until foamy, then gradually add the 100g of sugar and whisk until the whites are holding their shape but not too stiff.

Lighten the chocolate mixture with a dollop of egg whites, and then fold in the rest of the whites. Pour into the prepared tin and bake for 35-40 minutes or until the cake is risen and cracked and the centre is no longer wobbly. Cool the cake in its tin on a wire rack; the middle will sink as it cools.

When you are ready to eat, place the still tin-bound cake on a cake stand or plate for serving and carefully remove the cake from its tin. Don’t worry about cracks or rough edges: it’s the crater look we’re going for here. Whip the cream until it’s soft and then add the vanilla and Cointreau and continue whisking until the cream is firm but not stiff.

Fill the crater of the cake with the whipped cream, easing it out gently towards the edges of the cake, and dust the top lightly with cocoa powder pushed through a tea-strainer.

Welcome to What Charlotte Eats, the greedy thoughts of a 26 year old girl from Warwickshire on recipes, ingredients and kitchenalia