This is the penultimate Comfort Food Week post. I just couldn’t do a week on comfort food and not include some kind of stew. You may remember I posted my recipe for stew and dumplings back in July, when the weather was still pretty warm, but I just love a good stew, and they are just so easy to put in the oven and forget about.

I think my husband would divorce me if I ever dreamed of cooking a stew without any dumplings, and whilst they’re delicious, they’re not the most healthy things ever. So in a search for something a bit less fattening I stumbled across this cobbler recipe on BBC Good Food (I swear I don’t spend ALL my time on that website…). I thought I’d give it a go as the ingredients are so simple, and they’re MUCH less fattening than a regular dumpling. I must admit though, I wasn’t expecting great things. However, I ended up being pleasantly surprised to find that the cobbles were light and fluffy, with a nice crust on top. The yoghurt inside makes them quite dense, but also moist. Admittedly they don’t have that same hint of sweetness that suet dumplings do, as the yoghurt gives them a bit of a tang, but with enough herbs and when eaten with the gravy from the stew you can barely even notice it. So convincing are these cobbles at masquerading as a dumpling that my husband didn’t even notice that they WEREN’T dumplings, which is a great success. I’ve made them several times now and they’ve been great on every occasion.

So far I’ve paired them with this chicken, leek and bacon pie (instead of pastry, obviously) and various stews. My current favourite stew is this lamb one; lamb always feels like such a treat, but this stew makes the most of a often-maligned cheaper cut, the neck, which seems sinewy when you’re cutting it, but by the time it’s been cooking for 3 hours it’s all rendered down and you’re left with lovely silky meat.

The method for making this stew is exactly the same as for the beef stew I posted before, except there are a few differences in ingredients. This is a real winter warmer! I’m hoping I’ll get a chance to make this for a crowd soon; I really want to cook it in a huge casserole dish and cover the entire surface with cobbles (or at least the circumference of the dish). I can’t think of anything more perfect to cook for family and friends in winter; I know I’d want to eat something like this if I’m invited anywhere for dinner!

Preheat the oven to 180C. Melt the butter in a casserole dish and add the chunks of lamb. Cook the lamb until brown, then add the flour and some seasoning and stir together. Add the thyme and the vegetables and cook for a couple of minutes. When the vegetables are turning golden, add the wine and simmer, then crumble an oxo cube into the stew and add 500ml boiling water. Bring to the boil, then put into the oven for 30 minutes.

Once the stew has been in the oven for 30 minutes, take it out and stir. Turn the oven down to 150C and continue to cook for a further 2 1/2 hours. Stir occasionally and top up with a bit more water if necessary.

Meanwhile, make the cobbles. Put the flour, herbs and seasoning into a bowl and make a well in the centre. Add the oil and the yoghurt and mix together with a dinner knife until it comes together as a dough. Use your hands to bring it into a ball, then split it in half and half again, and shape into four flat little patties. Once the stew has 20 minutes left to cook, take it out the oven, remove the lid and place the cobbles on top. Return the dish to the oven and bake for 20 minutes or until the cobbles are fluffy and golden on top. Serve with vegetables of your choice! 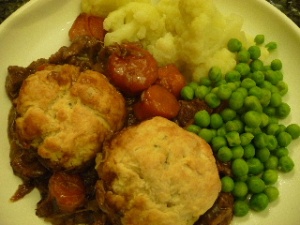 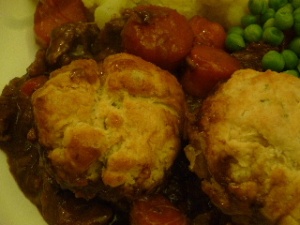